The fatal shooting on Tuesday afternoon of a 14-year-old youth as he was leaving football practice outside Roxborough High School has stunned a city already reeling from a relentless pace of homicides and shootings. And Thursday in City Council, Members made their own views known on the tragedy, and they called for additional action by the city.

Councilmember Katherine Gilmore Richardson (At Large) called on the Kenney administration to revise and release its 90-day plan to prevent gun violence, and she pointedly urged unnamed city officials to “put egos aside, put silos aside” and work together more effectively to address the ongoing crisis of violence in Philadelphia.

Councilmember Isaiah Thomas (At Large), who earlier in the week introduced a report recommending changes and reforms in how police, the District Attorney’s Office and the courts operate court for gun-related cases, called for a “full blitz” by the city on violence prevention, and vowed, “I am not defeated by this” latest fatal shooting.

Councilmember Cindy Bass (8th District) said “There is nothing normal about the shooting death of a 14 year old on a football field.” She urged parents at home to “look the shooter in the eye … if you believe there’s a gun in your house, turn the bed over, find it, and report this to the authorities.”

Councilmember Curtis Jones, Jr., whose 4th District includes Roxborough High, noted that the youth who was shot and killed was transported all the way from Roxborough to Olney, to the Einstein Medical Center, because that was the closest trauma care center able to treat emergency gunshot victims.  He noted the high levels of shootings in Philadelphia now, and wondered whether it wasn’t time to explore health-care capacity and how trauma centers are located citywide. Jones plans to hold hearings on the subject.

Councilmembers Helen Gym (At Large), Jamie Gauthier (3rd District) and several others expressed alarm and dismay over the repeating incidents of gun violence claiming far too many youths across the city, and like their colleagues, urged city officials to do more, and with a fresh sense of urgency.

But Clarke noted, “It’s not just about appropriation – it’s about implementation. Council appropriates these funds, but we cannot spend them. That’s for the administration to do. The implementation is critical.”

As an example, Clarke said that Council has appropriated more than $1 million in two consecutive budget cycles for the city to hire several dozen Public Safety Enforcement Officers, personnel that could write traffic tickets, handle code violations, and perform other tasks to free up Police Officers to be more present on the streets, fighting and preventing crime. Yet the administration thus far has failed to move forward and spend the funds to hire the enforcement officers. The issue is now tied up in an arbitration with the city’s police union.

The shooters in the Roxborough High incident, in which five youths were shot leaving football practice, remain at large. 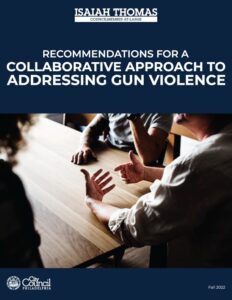 Earlier in the week, before the shooting at Roxborough, Councilmember Thomas held a news conference outside City Hall, where he detailed his office’s months-long study of how gun cases are handled by the city’s law enforcement and judicial systems. Councilmember Thomas released a report that revealed a number of issues that need to be addressed:

Thomas said he would work with any city agency to push for implementation of these reforms over the next 100 days, or by year’s end. Mayor Kenney signed an executive order on Tuesday that prohibits firearms at rec centers and playgrounds, except for law enforcement and other licensed persons. The mayor’s action came after the recent fatal shooting of Tiffany Fletcher, a Recreation Department employee, who was shot and killed in an errant shooting by a 14-year-old youth at a rec center in West Philadelphia.

In September 2019, City Council passed a similar bill, titled the Safe Havens Ordinance, which prohibits guns and other offensive weapons from being carried onto rec centers and playgrounds.

When reporters asked what the difference was between the mayor’s executive order and the City Council ordinance, an attorney with the Law Department tried to differentiate, saying the mayor’s action involved “managerial operations.” The resolution noted that Black men make up only 2 percent of all teachers nationwide, and in Philadelphia about 24 percent of teachers are Black and of those, just 4 percent are male.

Councilmember Gym introduced a resolution honoring the students, teachers, staff and families at Benjamin Rush High School in Northeast Philadelphia for their  selection as a National Blue Ribbon School by the Department of Education, a significant honor, and affirming their work to create a vibrant, inclusive, and academically rigorous school built upon on the pursuit of social justice and the arts.

The next Stated Meeting of City Council is scheduled to take place on Thursday, October 6, 2022 at 10 a.m. in Philadelphia City Hall, Room 400 and will air on Xfinity Ch. 64, Fios Channel 40 and stream at www.PHLCouncil.com/watch.