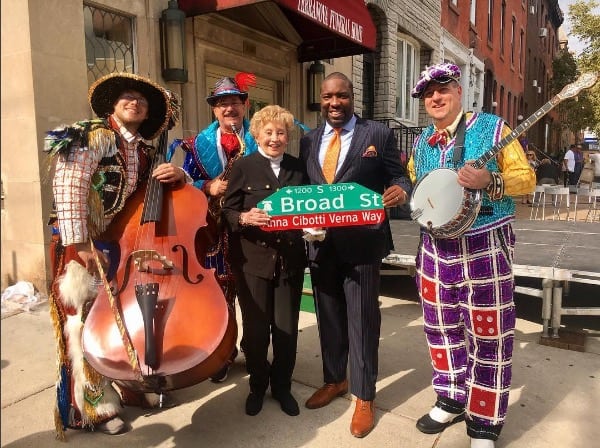 “Mrs. Verna served as Council President from 1999 to 2012, the first and only female in Philadelphia history to hold the position. She is the daughter of the late former council member William Cibotti and was elected to his Second District Council seat following his death in 1975. She served the citizens of the Second District, which encompasses parts of South Philadelphia, Southwest Philadelphia and Center City, as Councilperson from 1975 until her retirement in 2012. She served Second District residents even longer when she was hired by her father to be on his Council staff back in 1967. I have the honor to succeed Mrs. Verna in City Council and I have always welcomed her wise advice and counsel.

“In her almost 40 years representing the Second District and as Council President, she deemed herself as a consensus-builder who turned dreams of Philadelphians into realities. Among her legislative accomplishments was a citywide ban on public drinking, helping to close nuisance bars, cutting down the number of vacant spaces and assisting with the expansion of the Philadelphia International Airport and the Philadelphia Naval Business Center.

“I had the honor in 2017 to introduce and get Council to approve unanimously Resolution 170692 naming South Broad Street, between Federal Street and Wharton Street, ‘Anna Cibotti Verna Way,’ in honor of her lifetime of service to the City of Philadelphia. It was a special day for everyone and her 60 years of public service is a testament to her true dedication to the City of Philadelphia.

“Mrs. Verna told me when I came into City Council to care about and work hard for all the communities in the Second District because they demand your respect. I have tried to uphold her request every day. I have a heavy heart hearing the news of the passing of my friend. I express my deepest condolences to her friends and family on this tragic loss.”