Maria Quiñones Sánchez is a proven leader who has dedicated her life to addressing some of Philadelphia’s most entrenched problems, from endemic poverty to community development, from education to affordable housing.

Maria’s upbringing has given her a firsthand understanding of the challenges facing working families, immigrant communities and people of color in Philadelphia.

Maria moved to Philadelphia from Puerto Rico when she was 6 months old, with her mother and two older siblings to be closer to her father, who worked as a seasonal farmworker in Kennett Square and South Jersey. Because of struggles with alcoholism, her parents divorced when she was a small child, leaving her mother to raise her on her own.

As a small child, Maria, her mother, and her siblings lived in public housing on Spring Garden Street. After years working hard in Philadelphia factories, her mother finally scraped together enough money for the family to buy its first home in Hunting Park — despite an incredibly high interest rate that served as an obstacle to home-ownership low-income families.

Maria’s mother, Bienvenida, became the matriarch of a large, extended family that settled in Philadelphia in search of better opportunities on the United States mainland. She was a community organizer and constantly offered relatives a place to stay. She is still Maria’s inspiration and model for community leadership and service.

Because her mother spoke little English, at a young age Maria was forced to advocate on her family’s behalf, serving as a translator for interactions with utility companies and city agencies. These experiences taught her the importance of quality constituent services.

Maria first began her advocacy work in high school. She attended her freshman year at Girls High School, where she was one of a few Latinas in a school sharply divided along racial and socioeconomic lines. One counselor even told her, “Maybe you’re not meant for college.” Seeking a more welcoming learning environment, Maria transferred to Jules E. Mastbaum High School, one of the city’s top career and technical schools, where she studied business.

While there, she became heavily involved in ASPIRA, a nonprofit that focuses on developing Latino leaders and providing educational services. Maria made it one of the largest clubs at school and became president of all the ASPIRA high school clubs across the nation, earning herself a spot on the national board of directors.

After applying to several colleges, she instead enrolled at Temple University because she again feared attending a school with a large racial divide and where she would be one of the only low-income students to attend.

Maria majored in journalism and covered a local City Council election for a community newspaper, where she also wrote exposes on corruption in her community’s entrenched political class. Her coverage was so threatening to powerful special interests that she was sued and, at the age of 17, was served at her home.

Maria, who had just given birth to her oldest son, Edgar, temporarily left school to take a job in the office of the legendary Councilwoman Marian Tasco. Councilwoman Tasco deeply immersed Maria in policy, and she was heavily involved in improving the city’s workforce development and summer jobs programs. While working for Councilwoman Tasco, Maria also helped out on the campaigns of progressive female candidates, including Allyson Schwartz and several judicial candidates.

At Councilwoman Tasco’s urging, Maria then took a job at the city commissioners’ office. In six months serving as deputy elections commissioner, she helped rewrite the city’s voter guide and developed a comprehensive plan to roll out new voting machines among schools and community groups across the city.

She then took time off politics to enroll in a joint bachelor’s and master’s program at Lincoln University, the nation’s first degree-granting HBCU. After graduating with a master’s in Human Services, she worked for three years in the office of Councilman Angel Ortiz, the first Latino to serve on Philadelphia City Council.

She left Ortiz’ office to lead ASPIRA, the educational organization that helped teach her leadership in high school. At the age of 27, Maria led a stunning turnaround of the troubled agency, which was facing closure because of years of financial mismanagement, with a massive debt and overdue taxes. She led a total restructuring of the agency to ensure that ASPIRA could live within its means and negotiated settlements with the IRS, state and local governments to set the organization back on a firm financial footing.

Eugenio Maria de Hostos serves the city’s poorest community, providing culturally competent education to families who speak Spanish and who have immigrated to Philadelphia after years of unsuccessfully demanding the Philadelphia School District address the unique needs of immigrant communities. The school has been a model for similar charter schools across Philadelphia and Pennsylvania.

Maria also led the fight against discriminatory banking practices in poor communities, joining a lawsuit against a local bank seeking a merger.

After working as a non-profit consultant, Maria then served as regional director for the Puerto Rico Federal Affairs Administration, where she led an aggressive campaign to eliminate electoral barriers to Puerto Ricans living in Pennsylvania. She led successful campaigns to implement bilingual ballots across Pennsylvania, facing down entrenched interests who sought to disenfranchise Black and brown voters.

At the same time, she also led a successful lawsuit against the City of Reading’s police department to improve hiring bilingual police officers who could help build bridges with the local Latino community.

Finally, after decades of service, Maria ran a successful insurgent campaign to represent her community in City Council, becoming the first Latina to hold elected office in Philadelphia history. While on Council, Maria has led the charge to improve the lives and expand opportunities for all Philadelphians — particularly working families and from low-income communities. 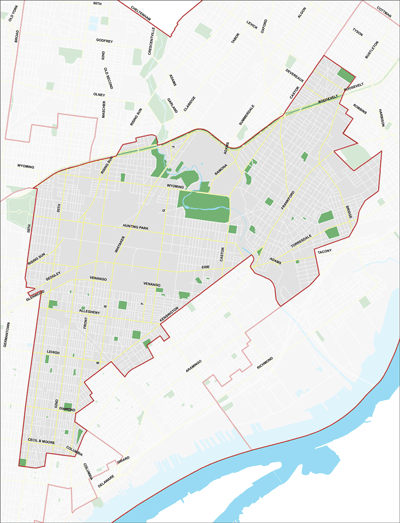