Jamie R. Gauthier represents West and Southwest Philadelphia as the 3rd District City Councilmember. Since assuming office in January 2020, Councilmember Gauthier has fought for her constituents’ right live with dignity and remain in the neighborhoods they’ve called home for decades. She is the only elected official in the City of Philadelphia with a planning degree, offering her a unique perspective on a range of social and economic issues.

In her role as Chair of the Committee on Housing, Neighborhood Development, and the Homeless, Councilmember Gauthier champions policies that encourage the construction of new affordable housing, and the preservation of the city’s existing stock. For example, Councilmember Gauthier, alongside Councilmember Quiñones-Sánchez, created the Mixed Income Neighborhoods Overlay District (MIN). Within the overlay, large new developments must keep 20% of their units affordable.

Alongside Councilmembers Gym and Brooks, Councilmember Gauthier also created the Emergency Housing Protection Act (EHPA), which provided extensive relief to tenants during the COVID-19 pandemic. The EHPA included the Eviction Diversion Program, which enables landlords and tenants to arrive at an agreement without having to go to Court. The EHPA and Eviction Diversion Program are considered national models and resulted in a 75% decrease in evictions citywide two years in a row.

Additionally, Councilmember Gauthier has been leading the charge to enact a stronger local response to the gun violence epidemic. In 2020, the Councilmember authored a resolution, unanimously supported by her fellow Councilmembers, that called on Mayor Kenney to declare gun violence an emergency. The resolution also called for the administration to respond to gun violence with the same urgency and level of resources with which it responded to COVID-19. When the Mayor refused to sign the emergency declaration, Councilmember Gauthier joined with Controller Rhynhart to demand a targeted investment in the 14 zipcodes with the highest levels of gun violence, and an overall heightened budget for violence prevention and disruption initiatives. These efforts resulted in a record additional $70 million investment in new funding for anti-violence initiatives in FY 22. The Councilmember continues to push the City to enact a bold, trauma-informed, and targeted response that recognizes gun violence is a public health emergency.

Councilmember Gauthier also partners with the community on a variety of other issues. For example, she committed $5 million to improve disinvested parks and recreation centers and awarded almost $500,000 in grants to community programs.

Prior to her City Council candidacy, Councilmember Gauthier served as Executive Director of the Fairmount Park Conservancy, where she led the organization in carrying out vital improvements in West Fairmount Park and oversaw stewardship and care for parks across the city. Councilmember Gauthier is also the former Executive Director of the Sustainable Business Network of Greater Philadelphia.

After graduating from Central High School, Councilmember Gauthier received her undergraduate degree from Temple University and her Master’s in Urban Planning from the University of Pennsylvania. 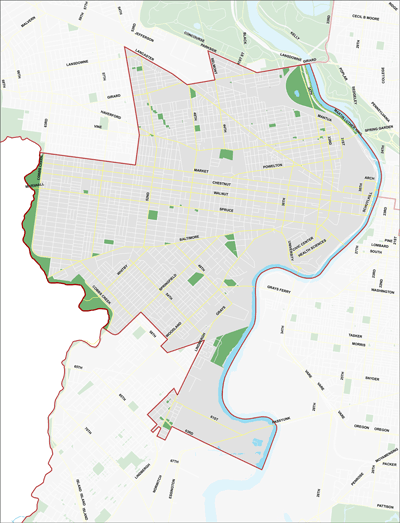